A couple of days ago I found 'Legend' on my bookshelf and since I was waiting for my latest book order to arrive I decided to give it another shot and reread it.
The first time I read Legend I wasn't fully convinced.. So, this time I was pretty sceptic but thought
"Well, maybe I just didn't really get the background of the story".

Basically, there's the Republic and the Elector with a great amount of soldiers, a boy, Day, who is considered the public enemy number one and a girl named June Iparis, who is working for the Republic as an agent.
After finding out that June's brother was killed she wants to find the murder and make him pay for what he's done. From what her supervisor told her, Day is the one to be blamed for this incident.
Long story short June finds the supposed murder and what happens now is nothing Day or June would've ever expected...

And let me tell you one thing: I am so unbelievably happy that I did reread it! I loved it! And I give 4/5 stars. The only thing that kind of bothered me was that the main character June is only 15 yrs old and a republic agent. That's just my opinion but I also don't really see why the Republic would feel threatened by Day, who is also 15 yrs old... But other than that I really enjoyed this read and though I do not like ebooks too much (I wanna smell the book and feel the paper!) I almost immediately downloaded the beginning of the second part 'Prodigy' from the ibooks app! 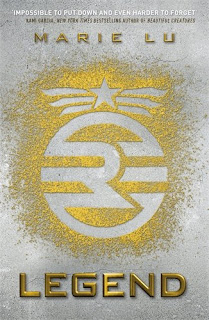