This great, and true story tells the life of two married painters, which live together in Copenhagen. Einar Werder, which is played by the academy award winner Eddie Redmayne, poses for a painting his wife Gerda, played by Alicia Vikander, has to finish for a Ballet dancer, which couldn't make it to this appointment herself. So Einar gets to hold a dress and wear stockings and this is the moment when his true self comes to the surface.
As a game, Gerda suggests Einar going to an event as a woman, Lili. For his wife all of this is just a fun thing to try out but Einar/Lili is starting to find out who he really is...

I am not going to go on here because I for my part did not know the whole story so it was a fascinating time watching the movie. What I did know was which actors would be starring in this film so I have to admit that I set my standards really high and I am not overacting by saying that they exceeded all my expectations! And of course, Eddie Redmayne is nominated AGAIN for an Oscar which makes me so unbelievably happy because he really would deserve another one in my opinion. Alicia Vikander is nominated for Best Performance by an Actress in a supporting Role, and after her performance in The Danish Girl I would be less than surprised to see her going home with a prize!

I can say this is a heart-rending story, amazingly told. So a thousand congrats to the director Tom Hooper and Lucinda Coxon for the screenplay.
The whole content of this film is very important especially for people struggeling with intersexuality! It shows so much strength in only 1h and 59 minutes and I think it helps to understand what it means to be worn in the wrong body.
I actually don't have the right to say something like that because I don't know those problems and I cannot even imagine how hard it must be to be treated insane but I just felt the urge to share my thoughts.

So if you are looking for a movie that makes you laugh and cry and has stunning costumes you should definitely go and check out "THE DANISH GIRL". 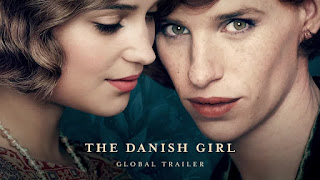